What is the best chronograph for Long Range shooting?

When I’m running Precision Rifle courses, my students often ask me what the best chronograph is for long range shooting.

In this article, I’ll be discussing the types of chronographs available, the pro’s & con’s of each, and finally I’ll let you know which type (and brand) I consider to be the best chronograph available today.

What is a shooting chronograph and what is it used for?

A chronograph is used to measure the velocity of a projectile when fired from a weapon (including bows and crossbows). This is known as the muzzle velocity (MV).

Why do we need to know our projectiles velocity?

Because if we know the projectiles velocity, dimensions, and ballistic coefficient (BC), we can accurately predict where the projectile will go which is vital, especially when shooting at long range.

Advancements in modern technology allow us to use ballistic solvers (like the incredibly accurate Applied Ballistics App) on smartphones and tablets to obtain a firing solution.

The outputs (firing solutions) provided by these ballistic solvers are only as accurate as the inputs that we give them so having accurate data (bullet BC, bullet dimensions, and MV) is critical.

So…to get that MV you are going to need an accurate chronograph.

To assist you, I’m going to explain what separates a good chronograph from the best chronograph.

Let take a look at the different types of chronographs…

There are many types of chronographs available for shooters but essentially they fit into one of the following categories:

Lets take a look at each of these different types and I’ll explain how they work and what their advantages and disadvantages are. 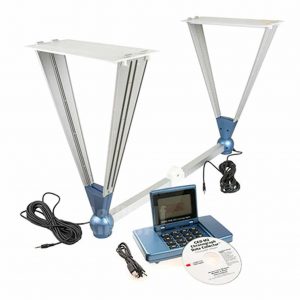 Optical Chronographs are made up of a series of screens that are set up “inline” and a set distance apart.

The chronograph is then set up a short distance (measured) in front of the muzzle of the rifle (usually around 10 feet/3 meters).

A projectile is then fired between the screens.

Because the distance between the screens is known, the software can determine the velocity of the round.

Generally, it pays to fire between 10-20 rounds through the chronograph and take the average MV.

Things like Standard Deviation and Extreme Spread can also be measured and recorded.

Once the average MV has been measured, you then have to “back-calculate” to get the true MV. This is required because the chronograph is set up forward of the muzzle a set distance depending on the caliber of the rifle being fired (to avoid muzzle blast affecting the results).

As such the chronographs readout is actually not a “true” MV until you have taken the distance from the muzzle to the first screen into account).

This results in a true MV that is slightly higher than the initial readout.

Now for the disadvantages…

So…although most of them are pretty damn good, IMHO an optical chronograph, even one as good as the CED M2, is not the best chronograph type for long range shooting.

Time to move on to Acoustic Chronographs… 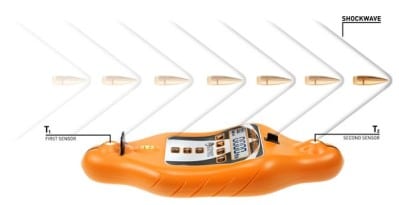 Acoustic chronographs are not hugely popular and I really only have experience with one, namely the SuperChrono by the Norwegian company Steinert Sensing Systems.

The SuperChrono itself is a small compact unit consisting of two acoustic sensors (situated at either end) and a readout display.

As with Optical chronographs, due to the requirement for the device to be placed well forward of the muzzle to avoid errors caused by muzzle blast (usually around 10 feet/3 meters), the MV is not a “true” MV and a “back-calculation” is required.

So, let’s look at the advantages of an Acoustic chronograph…

Time for the disadvantages…

So…despite the hype, IMHO an acoustic chronograph (like the SuperChrono) is not the best chronograph type for long range shooting so let’s see what else is on offer.

That’s enough of that..let’s move on to Doppler Chronographs… 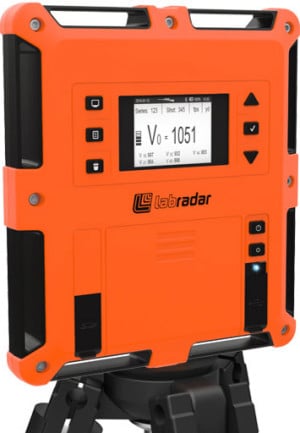 Doppler radar is considered to be the most accurate method of measuring the velocity of a projectile and its what the US military roll out when they test their munitions.

The military-grade Doppler radars can measure the velocity of the projectile throughout its entire flight!

It’s also used by the Police to identify speeding vehicles (although not to be confused with their “laser” speed detectors).

Unfortunately, up until now, this tech is generally beyond the means of most shooters because these devices are large and there is a huge cost involved.

However, things have changed!

The development of a portable Doppler system by Labradar is a HUGE step forward!

I have now replaced my Magnetospeed V3 Chronograph (see below) with the Labradar.

Here are my thoughts as far as advantages and disadvantages go.

So…my final thoughts on the Doppler Chronograph are that it is AWESOME!

As I alluded to above, I liked it enough to replace my Magnetospeed V3.

In saying that though…I would happily use the Magnetospeed as it is just as accurate.

The MagnetoSpeed V3 chronograph is rapidly gaining popularity with shooters the world over due to it accuracy, portability, ease of set up, and ease of use. It’s definitely in the race to be the best chronograph money can buy.

It really is a well thought out piece of kit! The V3 also works with suppressors and muzzle breaks.

It provides you with all the details you need including the highest MV, the lowest MV, the average MV, the SD (standard deviation), and the ES (extreme spread).

It will detect steel core projectiles traveling between 300fps and 7000fps but for accurate readings of copper jacketed lead or solid copper projectiles, the projectiles speed needs to be 1000fps or greater.

Something to note, unless you get the picatinny rail mount, the bayonet attaches to the barrel which I know puts off reloaders.

Now, I’ve have not seen my group size blow out while using this device but I have seen a slight POI change (up to 1″). Personally, if you are concerned about the barrel harmonics being effected, I suggest a couple of things:

A couple of examples of bench shooters MacGyvering it…

Below is a photo showing how I have the Magnetospeed V3 set up on my personal rifles.

You can read the “how-to” instructions here and find the links to the required materials by clicking here.

This is a photo of the Wiser Precision Magnetospeed Mount…

This is a photo of the MK Machining Mount…

Now for the Disadvantages….

As you can see, there are advantages and disadvantages to every type of chronograph. At the end of the day, personal preference will play a part in your decision, as will the price.

As for the original question…what the best chronograph is for long range shooting, IMHO (and having used MANY chronographs over the years) you should really only seriously consider either the Magnetospeed V3 or the Labradar.

My first Chronograph was an Oehler, which was replaced with a CED M2.

When the time came to upgrade, I trialled the SuperChrono but it just didn’t cut the mustard and so I returned it.

I then used the MagnetoSpeed V3 for years and thought it was absolutely fantastic before finally biting the bullet and switching to the Labradar.

Rarely have I ever regretted my decision to keep my equipment up to date however, on this occasion I did.

Dont get me wrong, the Labradar is a fantastic chronograph…it just wasn’t suited to the additional tasks that I require of my chronograph or the style of shooting I do.

Also…as for price influencing your decision…why spend $100 – $200 on a “cheap”  and inaccurate device?

You are better off taking the initial hit and purchasing the best chronograph you can…buy once, cry once.

Anyways…that’s enough of me and my opinions.

Ultimately, the choice of chronograph is yours.

However, if you’d like to know more about the MagnetoSpeed V3, check out my Magnetospeed V3 Chronograph review, where I review it in more detail, explaining why I think it’s one of the top two chronograph’s that money can buy.

Oh, just a couple more things…firstly it’d be great if you would leave me a comment below and secondly, if you found the article helpful, please share it with people you know who may be interested in it.

P.S. Now before you go, don’t forget to take a look at our other resources…

1 thought on “What is the best chronograph for Long Range shooting?”